In this article I will be explaining PlayStation leveling system, how it works and why you should care about it. Keep in mind, this video is more for people who are new to trophy hunting scene or PlayStation platform in general.

PlayStation trophies were first introduced in 2008 on the PS3 and they had a major overall in 2020 prior to the launch of PS5 and that’s the system I am going to be focusing on.

Every full release on PlayStation platform is required to have trophies in it, and every trophy is worth a certain number of points.

There are 4 grades of them – Bronze, Silver, Gold and of course Platinum. 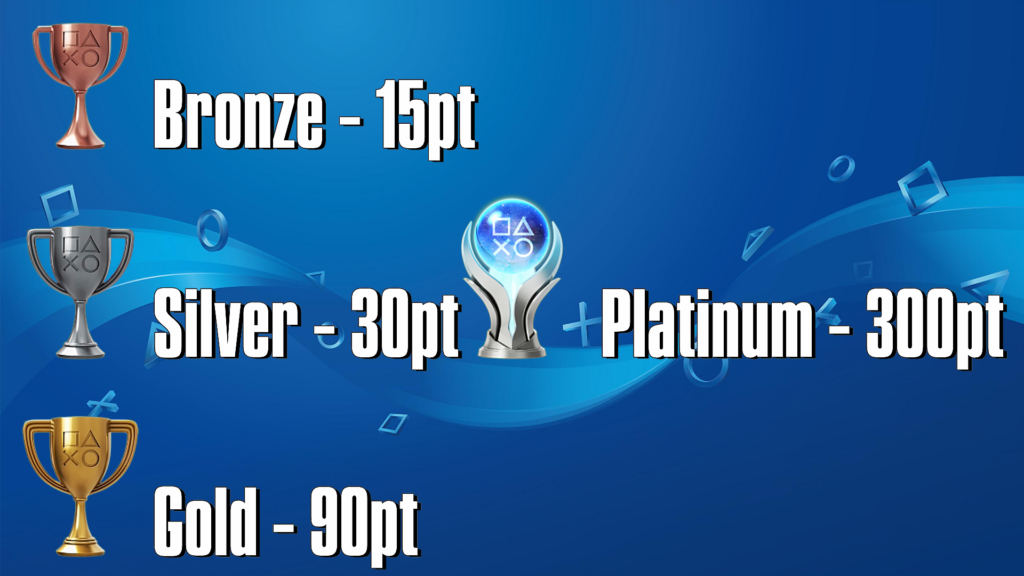 Each one of them worth different number of points, Bronze is 15, Silver is 30, Gold is 90 and Platinum is 300, when Platinum trophy is rewarded for unlocking all the other trophies in the game, DLCs excluded. By earning trophies, you are going to level up your trophy level that you can see on your account. 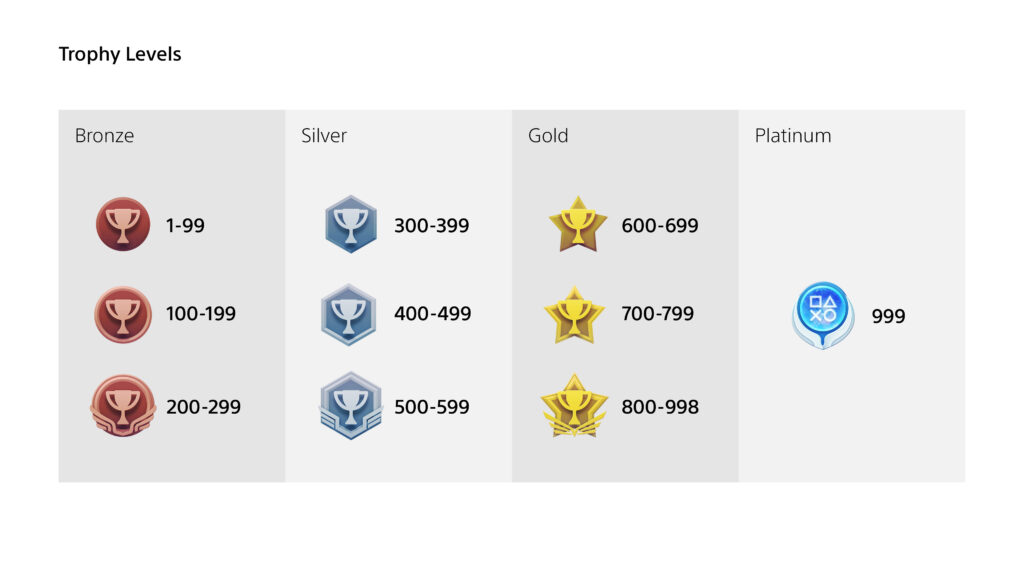 Unlike XBOX, where every game is required to have exactly 1000 GamerScore, it can fluctuate on PlayStation platform, and some games don’t actually have a platinum trophy all together. Amount of points per game, again DLCs excluded, can fluctuate between 75 and 1400 points for 100% completion, when games with a Platinum trophy usually have around 1350 points, and that is the measurement I am going to use from now on when I talk about games.

As you get to higher levels you going to need more points to get to the next one, and the current level cap is 999. At first you might notice that you are leveling up really fast, and the reason for it is, the number of points per level between levels 1 and 99 is 60 points, so pretty much 4 bronze trophies or less than 1 gold. Overall to get to level 100 you will need 5940 points or about 5 games worth of Platinum trophies. 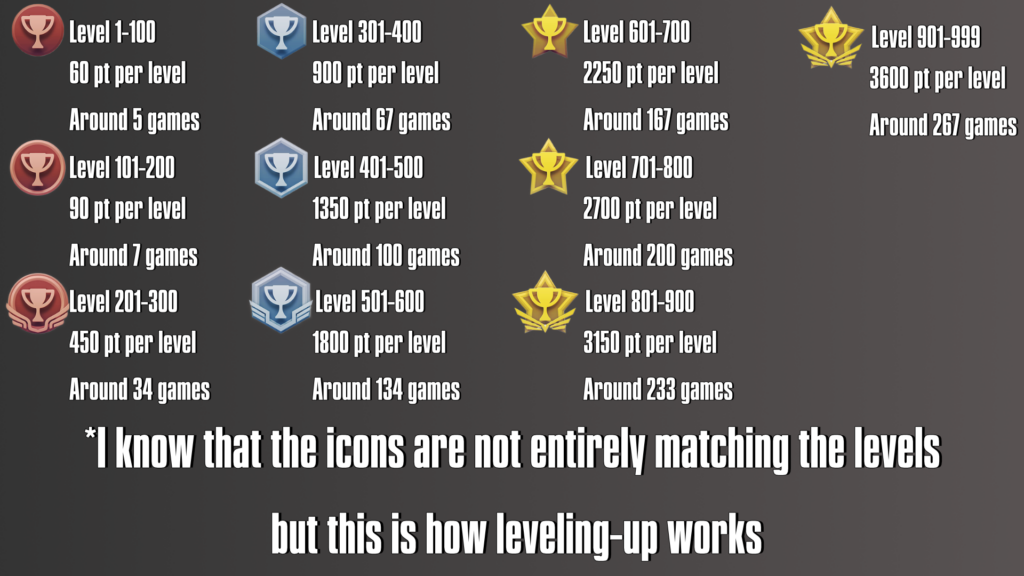 Getting from level 101 to level 200 is going to take 90 points per level, or 9000 points in total, which is around 7 more full featured games, but after level 200 there is a steep curve with it needing 450 points per level so this one will actually take you 45000 points, so around 34 games and it’s just getting steeper from there, so you get the idea. You can see that really well in a graph form, as it looks almost exponential, that’s why most of the people you will meet online will be between level 100 and 200. 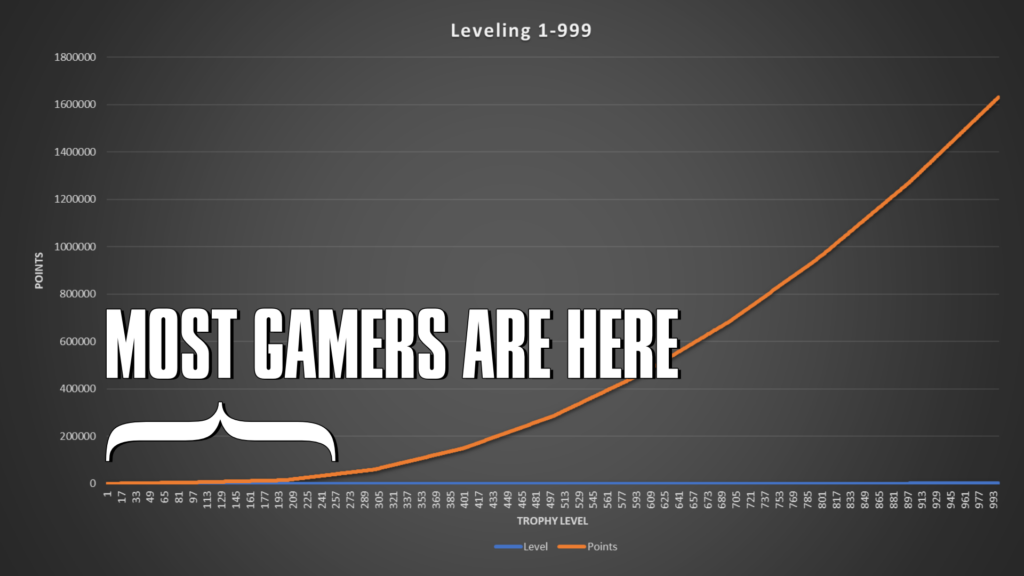 Why should you care

Now you might ask yourself why should you even care about it, and to be honest it is a fair question, as in 2021 it’s just basically Internet points. There used to be a program, when Sony would reward players with 10$ PSN card for every 10 platinum trophies, but it was shut down eventually. There are games that reward you with bonuses for getting a platinum trophies in them, like God of War and Spider-Man that give you avatars that you can’t get otherwise, but most of the games don’t actually reward you with anything.

So then why there are so many people who participate in that hobby?

I like think that everyone has their own reasons, I like doing that because trophy hunting allows me to experience the game to the fullest. If not for trophies I would never challenge myself to play a game on the highest difficulty or try to beat an action game using only a knife so it can be really fun and it gives games more replayability if done right.

There is a trend among the developers to overdo collectibles, but again, some of them can be really fun and give you more immersion and world building. Before starting trophy hunting on PlayStation, I was primarily a PC gamer, a platform where trophies are not that popular. Sure, there are Steam achievements but to be honest I never really cared for them, and although I am sure that there are communities of achievement hunters on PC they were never on my radar, unlike PlayStation and Xbox that have huge communities of people who share this hobby and I actually believe that this is actually the best reason to care, as I met a lot of great people along the way. 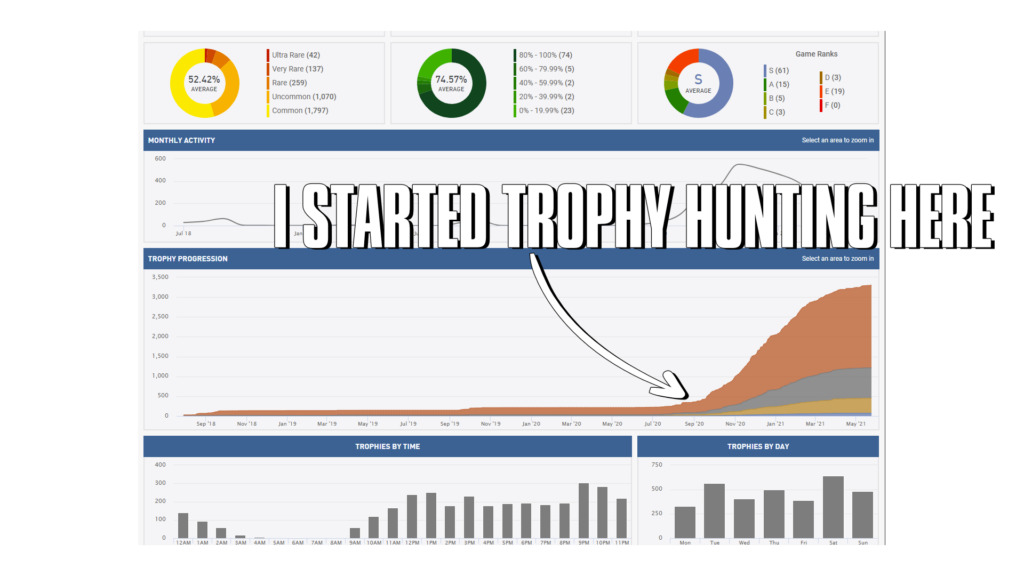 Another reason for me, as I am pretty competitive in my nature, is the leaderboards. Although there are no official PlayStation leaderboards there are a couple of big websites that have their own, with a cheater removal team and they take it pretty seriously with a full-on rule system in place. The most prominent that I use is on PSNProfiles, a website that hosts a huge community of gamers and there you can see your trophy list, find game guides and the biggest leaderboards, which you can filter by Country and platform if you wish.

My goal when I started out was to get to Top 100 in my country, which I did, and it actually was a really cool experience for me.

Overall, trophy hunting can be a very cool hobby to meet new people and experience games in a way you never did before, and for all of you competitive folks, the fact that you can place yourself on a global leaderboard is really cool.

I hope I did clarify some of those topics for you guys and if you have any questions, please leave a comment in a comment section below.

Anyway, as always, thank you for reading and have a good one!