Grubby platinum trophies. This is a controversial topic among the trophy hunting community, as some people despise them, while others believe that they are great to grow your collection and climb up the leaderboards, and to be fair both sides have a point, and I will talk about the pros and cons of both points of view, so keep in mind, this is not a criticism as both opinions are valid, just my personal view and a small analysis.

Publishers like Ratalaika Games made their entire business model to accommodate trophy hunters and flooded the market with sub one hour platinum trophies, and it’s obviously working, otherwise they wouldn’t keep doing it.

If you look back at the PS3 era, gamers who would get 100 platinums a year were super dedicated people, and now you can literally do it in 24 hours, like Brian English, who owns a PS5Trophies YouTube channel recently did as a challenge. Just to compare, one of the easiest platinum trophies from back in the day is Terminator Salvation, and it is a 5-hour platinum trophy that requires you to finish the game on the Hardest difficulty, which to be fair is pretty easy, but still.

Now, I am not here to be like an old man and say “back in my day…”, because I wasn’t even a trophy hunter back there, but it’s important to understand the changes that are occurring in the trophy hunting scene. 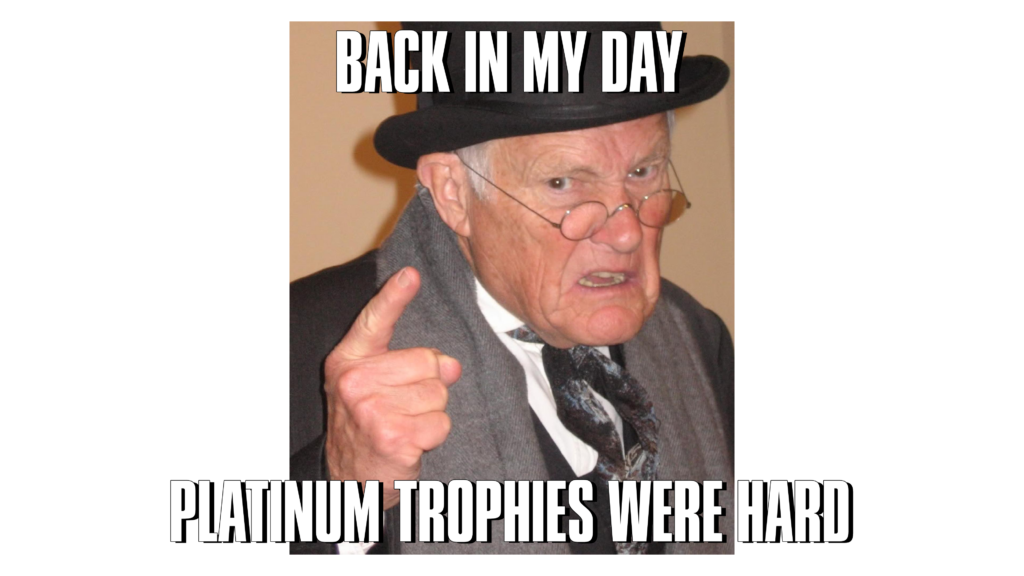 Fun Factor – Why you Shouldn’t

I want to be clear; I am not saying that I am above those types of games as I do have a couple of easy platinum trophies on my account, but that’s the thing, playing them was never enjoyable for me. PlatinumBro recently made a video about him quitting trophy hunting because of this exact reason. And to be honest this the most important part of this hobby in my opinion, you are playing video games, you are supposed to have fun with them, not just plowing through easy and boring games for trophy points.

That being said, it’s not like quick games can’t be fun, if you are enjoying them, then by all means, keep doing that, everyone has different taste and there are some short platinum trophies that I had a blast with, like Donut County, a 3-hour indie game with some great humor and I really enjoyed playing it, but unfortunately, it was an exception to the rule, at least for me.

As for my trophy hunting, I decided early on to only go for a platinum trophy in games I could see myself playing regardless of trophies. If a game answers these criteria, despite of its length and difficulty, I would play it, if not I wouldn’t. I am not saying that I followed this rule for 100%, but I did my best. That way my trophy hunting was mostly enjoyable experience and despite the fact that I could’ve had a lot more platinum trophies at this point I am happy with my collection and I had fun with most of the games there, and it’s the most important thing for me.

Another issue for me personally is that I wanted my trophy collection to look impressive, and what I mean is, for it to have mostly critically acclaimed games. Obviously, everyone has their own definition of good games, but I think you understand what I mean.

Like, if you pick any profile from the top trophy hunters in the world and look at the games, they played to get there you would mostly see lots of stacks of 1-hour platinum trophies, and even if they completed some amazing and hard games, they are spread too thin to appreciate them, and that is something I didn’t want for myself.

Leaderboards – Why you Should

On the other hand, if you want to climb the leaderboards you actually don’t have a choice and if you don’t play those games that everyone else at the top of the leaderboards are playing you will be left behind.

Let’s look at the graph I made to represent leveling growth you can get with 200$ and 200 hours of your time if you invest them in quick platinum trophies vs AAA titles. I took a very generous average of 25 hours and 25$ for AAA game, as you can get them second hand or on sale most of the time, and 1$ and 1 hour for grubby game as a working average for this analysis to make a bit more simplistic. 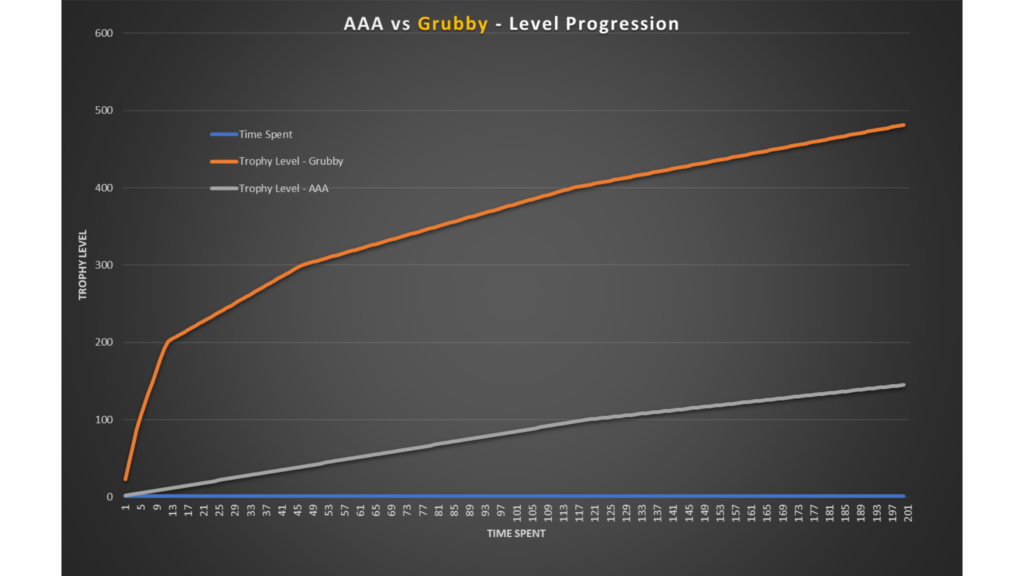 In the end for the day, you can clearly see that a trophy hunter who is exclusively playing those cheap and quick games can get from level 1 to level 480, around 260,000 points in just 200 hours, while by doing AAA games you would only get to level 145 and have about 10,000 points, and this is huge, as you just won’t be able to catch up easily. 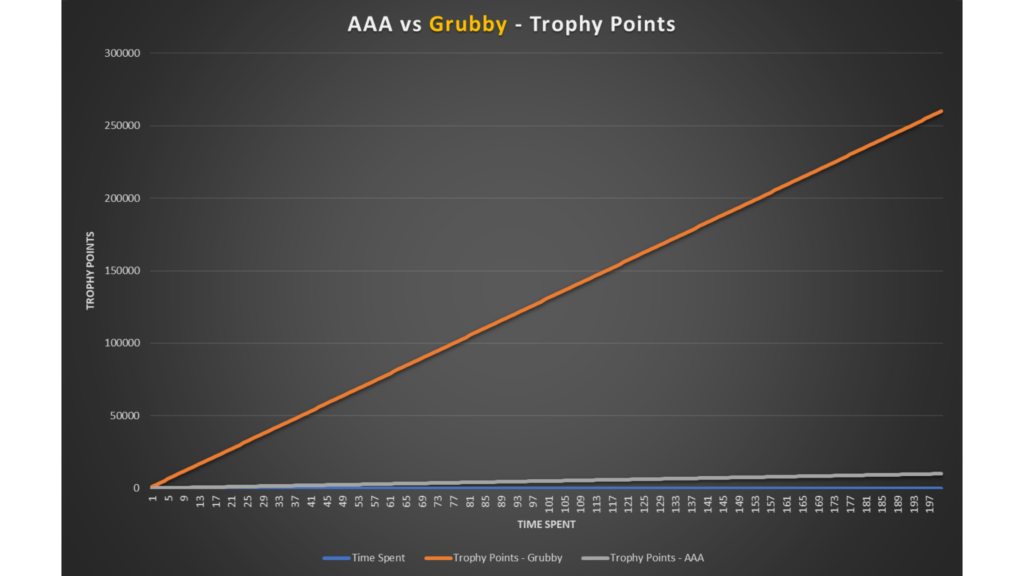 So, you can clearly see that those games are providing by far the best return on investment in money and time per trophy points value, so if you are looking to level up your profile quicky or be competitive on the leaderboards in any significant way that is honestly the quickest and cheapest way to do so, and it can be easily seen in a visual form.

That is actually the reason why after getting to top 100 in my county I kind of stopped caring about the leaderboards, as I know that I don’t want to pay the price I’ll have to, to climb any higher.

And I know that it is very simplistic representation, because in reality it’s never black and white and a lot of people are somewhere in the middle, but it’s for analysis porpoise.

I would say that you need to decide for yourself what type of trophy hunter you want to be and what is more important and fun for you, as there is no one right answer and you can also be somewhere in between. In the end of the day if you want to climb the leaderboards you have to play those easy games, but it is not enjoyable for me personally so it is a tradeoff and only you know how you prefer to spend your time and money. I guess what I am trying to say is, if you like doing what you are doing just keep at it, and don’t let some guy on the internet tell you that what you are doing is wrong.